The Meaning of Civic Ritual

Prior to the modern era, nearly all societies were deeply steeped in ritual. Kings were addressed in certain ways, universities were only entered by certain doors, certain things were done on certain days, and certain actions brought consequences of fasting or ceremonial cleanliness, to name a few. As Catholic Christians, we know this acutely, because our religion is one of the last great holdouts of ritual left in the world. We memorize or read many of our prayers by rote, and observe that there are common formulae between them. We bow our heads to the priest as he enters a mass or gives us a blessing. Even the most ordinary things, such as sitting down for a meal, have a few little words and motions associated with them in most cases.

Within our modern civilization, however, it is very easy to dismiss ritual. Most of us likely think of it all as words for words’ sake, and actions for mere show. Ritual is seen as something antiquated. Even learned scholars and civic figures often dismiss all of it as born from ancient ignorance and boredom, or even an effort to gain power over the masses. Even those of us who piously obey the rituals of our religion often see the ritual of the ancient civil orders as something quaint and silly, and when we replicate it, it’s seen as either humor or a sort of atavistic protest against unrelated social disorders.

All of this is done in error. We must never dismiss the actions and laws of bygone societies without first seeking to understand them. Anything done by entire nations must have some manner of compelling reason behind, even if that reason is a bad one. And this is certainly the case with the use of ritual.

Pious Catholics have an advantage in understanding this, because we know that every single one of our rituals is done for a reason. Even the slightest gesture or most passing word of our ceremonies is invested with a meaning, which can be understood, and which those performing the ceremony ought to have in mind. We end so many of our prayers with the same invocations not for the sake of the words, but to demonstrate tangibly that all our prayers are united with the prayer of Christ. We kneel before the altar not in reflex of ancient shows of power, but to give visible witness that we all acknowledge how small we are before the power of God. Even the most complex and opaque ceremonies have a clear meaning. The blessing of the Paschal Candle in our yearly vigil may seem like a needless profusion of words, but it serves to link the priest’s work of a few minutes to antecedent scriptural readings, dogmatic declarations, and pious acts of worship that would take hours to replicate and explain.

In this way, religious ritual forms a sort of language which we can use to express our relationship with God more easily. Our ceremonies and orisons are like pointers in a computer program. Once we have established a doctrine, or an act of piety, or a solemn resolution, we do not need to duplicate it in its entirety the next time it is used. Instead, we can use an act of ritual to tie it into our current actions in a matter of moments. A complex ritual like the holy mass is not a pointless profusion of words; it is a rich tapestry of meaning that draws upon the experiences of its participants’ entire lives.

Civil rituals are much the same, but as we begin to consider them, a danger immediately arises. Ritual is appropriate in the religious space, even necessary for it, because God is vast, and so is Man’s relationship with Him. There is so much meaning there that ritual is almost necessary for us to interface with it.

But when we perform a civic ritual, what do we mean? When we genuflect before the king, what do we signify? When we pin a lilac to our coat, or knock a certain number of times on the university door, or brew a certain blend of tea on a death anniversary, why do we do it?

I do not intend these questions to be rhetorical. I encourage the reader to consider them honestly. The reason I do this is because in our modern society, we are largely illiterate in the language of ritual, and consequently, I find that most people who do attempt to create ritual make a fatal mistake. They do so without understanding to what the ritual refers.

When we institute a ritual without a clear understanding of what its rubrics, invocations, and gestures represent, it truly is words for words’ sake, every bit as pointless as what the common modernist decries. A ritual created inexpertly will ring hollow and taste lifeless, and is doomed to bear no fruit in those who perform it.

Let us take the rituals of the patriotic American as an example of this. A great many events in the life of an American begin with a pledge of allegiance to the American flag. But to what end? A flag is a piece of cloth, and the republic for which it stands is built on the consent of the governed, not to mention locked in a state of division between rival voting blocs. Even if you were to pledge your troth unto it, that is something that can only be done once, except in cases of forgiven treachery. Unlike the Lord’s Prayer, the pledge of allegiance has no effects upon the speaker when repeated. So why say it so often?

Compare this to the vows taken by a medieval knight when he was inducted into a chivalric order, vows which were oft referenced in whole or repeated in part later in the soldier’s career. To the modern eye, these things seem quite unnecessarily verbose in phrasing and dramatic in form. But they were done in the way that they were done because a knight could at any time be called upon by his superiors to die upon the field of battle, and when he was called, it was necessary for society that he answered. Otherwise, in the face of the infidel, the barbarian, and the traitor, his civilization could not sustain itself. Therefore, in order to signify the mortal gravity of the knight’s obligation, as well as its binding nature and the social dignity that went along with it, ritual was used. Perhaps there were times in which this ritual was overdone, and could have been pared down. Likely, such times were few.

I cite these two simple examples in order to give a warning to the Edanian citizen, the serious micronationalist, and the political traditionalist of any location or creed. To all of those groups, a reinstitution of ritual is quite appealing. But to carry out this reinstitution without careful consideration of the meaning it carries forward is an error, an error which can, in fact, be dangerous to your traditionalist cause.

It is the intent of the Royalty and Nobility of Edan to be literate in the language of ritual in all that we do. It is our resolution to institute every ritual with care, so that we only create rituals that will be useful and meaningful for many years to come. We shall neither give nor adopt any title that carries no weight. We shall neither perform nor command any gesture that is not meaningful. We shall neither speak nor write any invocation that cannot be understood. And we encourage you all to do the same.

The Flag of Edan

Our Shield is Truth, our Sword is Justice, our Path is Freedom 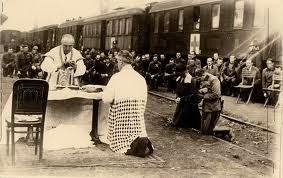